Why Are Some Children Still Going To An Empty House After School?

Laura fears It’s been more than a quarter century since we first learned the term “latch-key kid.” Children returned home after a long day at school to an empty house. Why? Both parents were busy working or a single parent was laboring as the sole breadwinner. After-school programs started taking shape to address this troubling and growing trend of latch-key kids. County After-School Activities (CASA) and the YMCA began offering after-school programs to help children with homework, provide active time, snack time and creative activities. For many working families, the programs were a welcomed and affordable alternative to leaving their children home alone. Today, Loudoun County boasts over 2,000 kids who participate in after-school programs. But, with these programs firmly in place, why are some children still going home to an empty house after school? In November 2014, 100WomenStrong hosted an informational session with the YMCA and CASA to learn more about Loudoun County’s after-school programs. What were the benefits of these programs, where were their needs and why were some kids still going home to an empty house? Below is an overview of the two main after-care programs based in Loudoun County.

A look at two after-school programs in Loudoun County
Studies have shown that after-school programs increase school attendance and engagement in learning, improve test scores and grades, and enhance social and behavioral outcomes. In addition, the Communities That Care study revealed that students who participated in after-care programs were 25% less likely to have initiated delinquent behavior, 32% less likely to have initiated the use of alcohol, and 33% less likely to have initiated cigarette use. To create a well-rounded use of time, after-school programs tackle a variety of areas and subjects, including music & drama, arts & crafts, physical activities, learning new skills, homework, reading, educational time, and community service projects. The programs foster strong core values of honesty, respect, caring, and responsibility and strive to develop greater confidence and self-esteem.

YMCA Loudoun County
The YMCA (“Y”) program in Loudoun currently serves about 378 children. The program locations are based in 17 schools around the county, many in high need areas. The current cost per month for this state-licensed after-school program is $325 but the Y does not turn anyone away, regardless of inability to pay. They are an all-inclusive provider that works off a sliding scale. To raise funds, the Y acquires grants, receives donations, and holds events such as their annual Chocolates Galore event, Golf Tournaments, and 5k/20k Races. The Y gives away 100% of the money they raise, sometimes exceeding their program budget, having to take from their operations budget. In addition to finding funding sources, other obstacles reaching kids are language barriers and lack of transportation.Currently, the Y does not have a bricks and mortar facility in Loudoun County. Nonetheless, they are looking to expand to more schools, as well as expand the actual programs to include seniors and preschoolers. The Y also offers a popular summer camp with about 350 kids participating each day. The Y’s goal is to eventually participate in all Loudoun County public elementary schools, provide more outreach to the community, and build partnerships with the community. 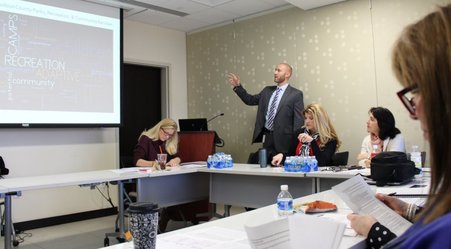 CASA was started in 1983 with a pilot program to address the issue of latch-key children and still has the same mission today. Initially, CASA served 4 locations and had 63 participants; today, they operate in 44 locations (42 elementary schools and 2 community centers) and have an average enrollment of approximately 1,900 participants. CASA is a popular program which serves kids from kindergarten to 5th grade at a cost of $325 per month. The state-licensed program has a lengthy waiting list which prevents some children from participating in CASA’s programs. In 2014, CASA’s Division Manager, Dan Bureau, identified schools with high rates of free and reduced lunch programs and compared those same schools with CASA enrollment. It was noted that schools which have the highest rates of free and reduced lunch programs (primarily located in the Sterling area) have the lowest CASA enrollment numbers. The conclusion from this comparison analysis: the cost of the CASA program is a barrier for these families. While they qualify for free and reduced lunches, these families may not qualify for after-school subsidies from the Department of Family Services. Also, some families may have multiple elementary aged children which can double and triple the cost.Presently, CASA does not offer direct subsidies to families who could benefit from sending their children to after-school care. The idea of a sliding scale payment was introduced to the Board of Supervisors in 2014 but was not adopted. CASA continues to look for private sources of funding so that they may offer a sliding scale payment alternative to families in need.Both the Y and CASA offer a vital service to Loudoun County families. Each organization provides a safe, healthy after-school environment for children, each are Virginia State Licensed, and have dedicated staff. Yet, each organization is dealing with barriers which prevent them from reaching at risk families who may be most in need of after-school programs. If you are interested in donating funds, and/or volunteering your time or services to either of these deserving organizations, please see below.
For More Information
CASA
YMCA Loudoun County