In 2008, America was reeling from a collapsing housing market and ensuing financial crisis.  Concerned about her community, Karen assembled a group of women who shared a passion for giving.  She championed the idea of combining financial strength and leadership to help improve the lives of Loudoun County residents. In 2009, the group of 13 granted $28,600 in their first year of giving to several deserving Loudoun charitable organizations.  Today, 100WomenStrong is well on its way to building a lasting charitable legacy that will benefit the community for years to come.

Karen co-founded All Ages Read Together (AART), a school readiness program for low-income preschool-aged children. She also helped found NEW Customer Services Companies, Inc., the nation’s largest administrator of consumer product warranties, now part of NEW Asurion, Inc., where she served as General Counsel. She is currently CEO and Co-Founder of Altor Locks which has created the world’s lightest, strongest bike lock. She is an advocate for the growth of renewable energy in Virginia and a more secure and stable grid through distributed energy and spreads awareness through PoweredbyFacts.com. She currently serves on the boards of Lehigh University, Middleburg Film Festival, Venture Philanthropy Partners, and All Ages Read Together (AART). She published her first children’s book, The Lollipop Tree, in 2014 and released children’s book, Larry and Bob, in 2016.  Her third book, How to Eat a Peach, has an anticipated release sometime late 2018 or early 2019.  She holds a bachelor’s degree in English and Government from Lehigh University and a JD from George Washington University. 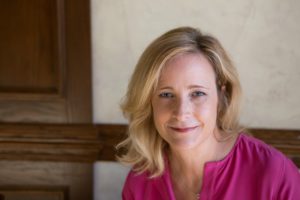 Kirsten Langhorne, co-founder of Langhorne Custom Homes, joined 100WomenStrong in 2011. She is on the Boards of The Community Foundation for Loudoun and Northern Fauquier Counties  and the Loudoun County Chamber of Commerce.  Formerly, Kirsten volunteered in schools, on PTSO boards, coached youth soccer, and became involved in a number of education initiatives in the county. In her early career, Kirsten worked in large homeless shelters and taught adult literacy.

Kirsten’s two sons have flown the nest so she and her husband Will are committed to enjoying Loudoun’s beautiful wineries, fantastic breweries, and scenic running paths.

Dorry Kee is one of the charter members of 100WomenStrong, joining in October of 2008 and currently serves on the Communications and Strategic Planning Committees.  She graduated from Pine Manor Junior College, was a Pre-Med graduate from Duke University and also, has a Masters in Health Care Administration. Dorry is a Trustee of St Anne’s Episcopal Church in Reston, a National Director at Large for the Hockaday School Alumnae Board of Directors, Trustee and Chair of the Development Committee for Pine Manor College in Chestnut Hill, Massachusetts and Trustee and Audit Committee Chair for the Arthur Vining Davis Foundations. She has 2 daughters. Hilary, who graduated with a BS from Emerson College in Boston, and is now pursuing Pre-Med work at Pine Manor College and Sarah, who is attending Shepherd University studying Health Sciences. Her past work experience includes management positions at Visiting Nurse Association in Dallas, Texas and Program Administration for the Physician Assistant Program for the UTHSCD Medical School in Dallas. She also worked for Electronic Data Systems at Blue Cross and Blue Shield as an Industrial Engineer and Marketing and Procurement Support primarily on bids for Medicare, Medicaid and local government services as a manager. She has been an Associate Broker with RE/MAX Executives for over 20 years.

Cindy joined 100WomenStrong on January 1, 2014 and serves a board member. Cindy joined the Loudoun Chamber of Commerce in 2016. Cindy was born and raised on Long Island, New York, and moved to Leesburg, Virginia with her husband Rich in February 2006. She loves to travel the world, take long walks with her husband and dog and visits to the ocean.

Cindy attended CW Post College in Brookville, New York.  She most recently served as a staff member/consultant to the Schaufeld Family Office as well as the C.O.O. at Shoes Cup and Cork Club in Leesburg.  Prior to moving the Leesburg Virginia, Cindy worked for the Estee Lauder Companies, Inc. and held various positions in Human Resources – Recruitment, Training and as a HR Generalist.  She also worked in Customer Service and in Global Supplier Purchasing. 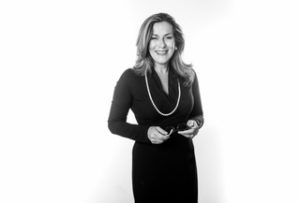 
Cate joined 100WomenStrong as a grant-maker in 2012 and has enjoyed every minute since then working with the Board and other members.  Active in her community, Cate served in the Governor’s Cabinet as Secretary of Commerce and Trade for the Commonwealth of Virginia, has created companies in London, Moscow and Kazakhstan and is the founding President Emerita of The Journey Through Hallowed Ground Partnership. She serves or has served on many Boards, including: George Mason University Board of Visitors; the University of Richmond Board of Trustees, The Virginia Community College Foundation, the George C. Marshall International Center, The Center for Innovative Technology, Great Meadow Foundation, The Northern Virginia Park Authority, the Waterford Foundation, Oatlands Historic Home and Gardens, The Women’s Center, Wolf Trap National Performing Arts Center, The British American Project, the Colonial Board George Washington University and Waterford Elementary School PTO.

Cate graduated from the University of Notre Dame, including an academic year in Tokyo, Japan and has lectured at numerous Universities including: Harvard, The University of Virginia, and has been the recipient of an Honorary Doctorate in Humanities from the Shenandoah University.  Born and raised in Wethersfield, CT Cate currently lives in Waterford, VA with her two children and a yard full of birds.  She loves to garden, hike and spend time with her family.

Sharon Virts is active in the Loudoun community serving as Chairman of the Loudoun Economic Development Commission; Member of the CEO Cabinet for the Loudoun County Chamber; Director of the Loudoun Inova Hospital Foundation; Board of Directors of the Middleburg Film Festival; Board of Trustees at Oatlands; serves on the Northern Virginia Regional Council for the Virginia Initiative for Growth & Opportunity; member of WE Capital (a venture capital group investing in women led businesses with social impact missions); member of 100WomenStrong. She lectures nationally on leadership development and small business growth.

In 2016, Ms. Virts was named to Washington Business Journal’s Power 100 and recognized as one of the top five female founders and owners of the largest companies in the Washington, D.C. metropolitan area. She also won a SmartCEO Leadership Award which recognizes the achievements of top women business leaders in the Washington, D.C. metropolitan area. In 2013, she was named Ernst and Young’s 2013 Entrepreneur of the Year for Greater Washington as well as received two gold Stevie Awards for Women of the Year and Female Entrepreneur of the Year in Business Services. She was recognized by the Women’s Chamber of Commerce for her assistance and mentoring support of other women-owned small businesses by receiving their prestigious Stellar Award in 2013 and their Women Contractor/Growth Master Award in 2012.

Recently married October, Sharon and Scott have six children between them – ranging in age from 16 to 31. Charlie is their only grandson. 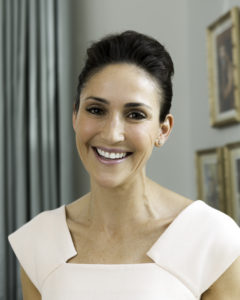 Leana Katz joined 100WomenStrong in 2012. Passionate about helping children, Leana volunteered as a Court Appointed Special Advocate (CASA) in abuse and neglect cases from 2007 through 2017.  In 2016 she received the Cleary Award for “vision and commitment to making a positive difference for children” from SCAN of Northern Virginia and in 2017 joined SCAN’s board. Leana and her husband are also donors and active members of Venture Philanthropy Partners in Washington DC. Prior to marriage (2006) and kids (2007), Leana worked in federal consulting for Accenture.

Leana is also an avid runner and has completed nine marathons – most recently qualifying for and running the Boston Marathon in 2017. She and her husband Marc, a local entrepreneur, have three children, ages 10, 6, and 4. Last but not least, Leana is Marc’s closest confident, advisor, and friend.

Leana earned her BA in Anthropology and Sociology from Smith College (2000). 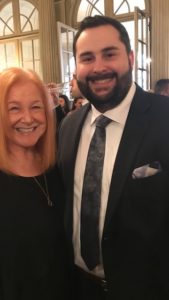 Judi joined 100WomenStrong as a grant maker in 2016.  She currently serves as the Chair for the Addiction & Recovery Committee.  She also volunteers twice a week for All Ages Read Together.  Born in Brooklyn, NY, Judi grew up in Hewlett Harbor and delighted in summers on Sackett Lake.  She received a BS in Speech & Hearing Therapy from Ithaca College,  a Masters from Hofstra University, Deaf Ed credits from Hunter College, plus earned a CCC ( Certificate of  Clinical Competence ) from the American Speech and Hearing Association.  Judi taught deaf children in New York for 7 years, where she also became president of her faculty.  In 1977 she married Michael Garlick and moved to sunny Florida where they had 3 sons, two dogs and a zillion in-laws.  She then went from diapers to carpooling to adjunct college professor over nearly 30 years while also facilitating women’s groups, studying Kabbalah, and creating a Social Action Committee at her synagogue.

After her husband passed away, she left Boca Raton to move near her youngest son (who thinks he must be the favorite),  but it is honestly to be near her favorite cousins in Leesburg, VA, where she can spend time with family, power through Pilates, learn Tai Chi, dance at Ida Lee, and march on Washington! 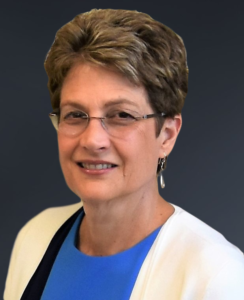 Margaret Gupta is an entrepreneur, social activist, and philanthropist. She serves as COO of ApexCoVantage where she oversees the company’s global operations and drives the adoption of cutting-edge technologies throughout the organization. Margaret is passionate about positive social change and co-founded WinVirginia, a Virginia PAC which was instrumental in driving the historic 15-seat flip in Virginia’s House of Delegates in 2017.  WinVirginia is dedicated to supporting progressive candidates at all levels of elected office and working to coalesce Americans around our country’s founding principles. After the sweeping win in November, Margaret co-founded WinDEM, a Federal PAC dedicated to extending the successful WinVirginia model to other States and making our democracy work again. She holds a BA in Political Science from the University of Texas at San Antonio and an MA in Political Science from the University of Michigan.

Driven by her passion to improve the lives of others, Margaret serves as President of the Gupta Family Foundation, a private foundation that supports organizations around the globe that are dedicated to helping disadvantaged people become self-reliant. She also serves on the Boards of the Wolf Trap Foundation for the Performing Arts, the Reston Historic Trust and Cleary University, and is a member of 100Women Strong.